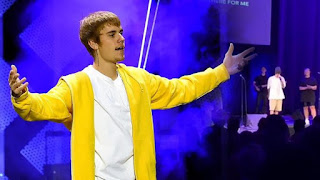 The What do you mean’ singer Justin Bieber got extremely emotional and broke down to tears as he lead worship in church. Bieber was leading the service at Hillsong Church in Los Angeles,As he spilled his heart out to he started to cry as well and got very emotional.

Members of the congregation spoke about the moment on Twitter. One of the members wrote: ‘Justin Bieber lead worship at church tonight & was so vulnerable & one thing he kept repeating was there is power in your weakness & vulnerability & like that was the TRUTH.’
Bieber has never been shy to show his religious side as he led the worship service at his home church in Beverly Hills where he has been a member for years. The singer spoke about his journey to find God and the difficult couple of years he has had, crying as he did so.
Read Also New Music:Travis Greene Launches New Album ‘Broken Record |Gospel Hypers
The pastor of the church Judah Smith revealed that the singer has always been a worshiper, but the time had come for him to use his immense talent to guide everyone in praising God.
I believe it’s not my job to push anything that I believe on anyone else,” he said at the time. “I think it’s just my job to be a light and share what I went through as far as my spiritual journey.” He had said in an interview.

Daughters And MOGmusic Collaborates On A Remix “Odo Ben Ni”